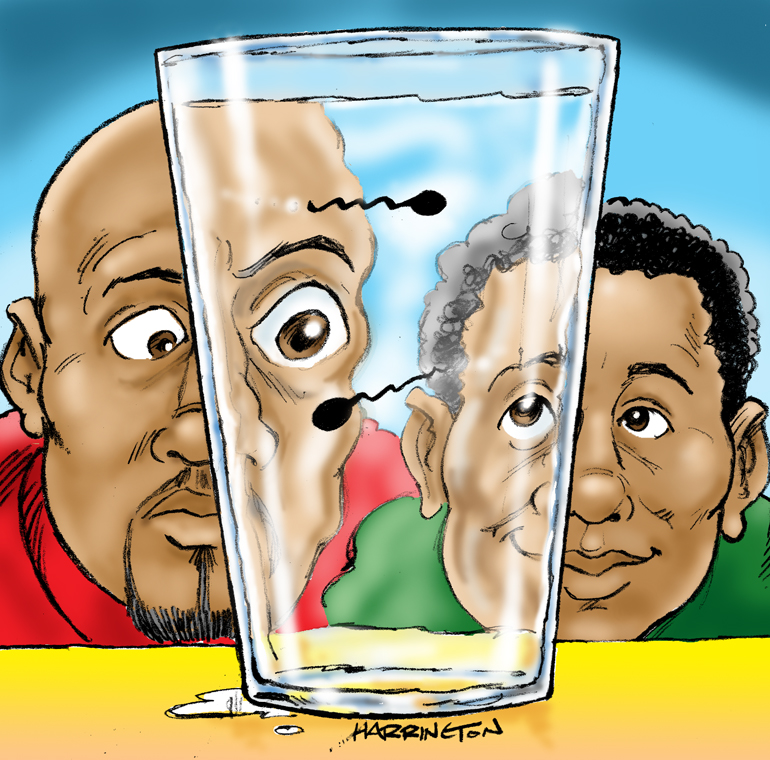 The birth of an anti-pet parent

I’ve never allowed pets for one simple reason. I don’t want to be stuck taking care of them. This might sound selfish, and in truth, it probably is. But for my kids, the choice has always been clear. Daddy can write books and work a job to pay for private school and a house on a relatively quiet block, or Daddy can spend his time caring for Scruffy, and we can live in the ‘hood. My kids have always chosen the former.

[blocktext align=”right”]”Thanks to a school-based conspiracy, my kids snookered me into accepting not one, but two pets into our home. To make matters worse, the pets were tadpoles.   Tadpoles, for those who’ve never watched the Discovery Channel, are baby frogs. They look like—and I’m using this description because it really is the only one that fits—black sperm.”[/blocktext]

Last week, everything changed. Thanks to a school-based conspiracy, my kids snookered me into accepting not one, but two pets into our home. To make matters worse, the pets were tadpoles.   Tadpoles, for those who’ve never watched the Discovery Channel, are baby frogs. They look like—and I’m using this description because it really is the only one that fits—black sperm.

Sound charming? No? I didn’t think so either. So why did I let them into my home? Well, it all started when my daughter, Eve, presented my wife, LaVeta, with a note from school.

“Dear parents,” it said. “A bucket full of tadpoles has been donated to our third grade class. We are excited to see how they change and grow over the next several weeks. Now, here’s the really exciting part … With your permission your child may bring home two tadpoles. All you need to do is fill out, sign and return the slip at the bottom of this page.”

As the parent with primary responsibility for dealing with school stuff, LaVeta instantly knew what she had to do. “Ask your father,” she said. Way to pass the buck, babe …

That evening when I got home, Eve and Little Solomon were sitting at the kitchen counter wearing pitiful expressions that said, “We want something we aren’t likely to get, but if we look sad enough, you just might give in.”

Feeling as if I’d walked into an ambush, I decided to play it straight. “How’s everybody?” I asked.

They said they were fine, but I knew they weren’t.

As the tension mounted, LaVeta pulled me aside and warned me about the tadpole question. My face went completely white. If you’ve seen my face, you know that’s nearly impossible.

The minutes ticked by and Eve remained silent, so I decided to broach the subject myself.  “I hear you want to ask me something,” I said.   “Yes, my school is giving away tadpoles, but we need our parents’ permission,” Eve said, then quickly added, “we’re going to let them go once they grow up.”

It was a brilliant ruse. Let us get the tadpoles and we’ll release them into the wild … Yeah, right.   I told her I had to think about it, but I already knew I’d have to relent. Eve had always wanted a pet, despite her mother’s cautionary tales about her childhood pet hamster, Hervie, who died suddenly. Little Solomon wanted one, too. Just a week before he’d convinced me to walk through a PetSmart store.

LaVeta likes those little lap dogs, and I was guessing she viewed the tadpoles as the next best thing.   Me? I know how the pet story turns out. Dad gets stuck with the responsibility. It’s bad enough walking a dog. But a frog? I’m sorry. I can’t be seen on the block with Kermit on a leash. That’s where I draw the line.

Still, I couldn’t disappoint my family, so I decided to do what was best for everyone.   “Okay Eve, you can have the tadpoles,” I said after a tension-filled half hour of waiting. “But you have to take care of them, and you have to share them with your brother. I will not be lifting a finger to feed them, and when they grow up, you have to let them go.”

She agreed to the terms of my pet pact, much to Little Solomon’s delight, and for the past week, things have been working pretty well. My son named one of them Steve. The other tadpole is affectionately called the lazy one. Steve and the lazy one have the best of everything—a clean Dixie cup and spring water straight from the WalMart collection, boiled strips of romaine lettuce to munch on, and a future in which they’ll live with their friends in the wild. At least that’s the way it’s supposed to go. Things are starting to change, though.

For now, Eve is changing their water and feeding them regularly. But it’s like Little Solomon told us about his pet philosophy. “I want a dog,” he said with all the honesty in his 6-year-old heart. “I just don’t want to clean up the poop.”

Featured article illustration by Richard Harrington. Solomonjones.com will publish Part 2 of the original series, The Tadpole Conspiracy, in a coming issue.

That’s what I’m afraid of G. It’ll be like a biblical frog plague or something. LOL!

Should we start calling you the “Frog Man” now? lol. Hey….be glad Young Solomon hasn’t encouraged Eve to ask for that puppy…cause little girls and their daddies…..thas all I”m sayin!

Great article. You have a new fan in me Mr. Jones. I think I will purchase your book today.

This was funny as hell. I know what you mean about pets didn’t want a dog because I didn’t want to walk it or clean up after it to much trouble. So I ended up with a cat that I have learned to love. My daughter still always ask for a dog and 2 years later we end up with a stinking ferret that’s very clever that keeps breaking out of the cage and yelling Freedom. Lol So you will eventually give in when your daughter turn those pretty brown eyes on you and that pitiful whiny voice it will be case closed. :). I wish I had a kindle to purchase your book Amazon really need to start sell other formats instead of just for the kindle. So have a nice day. Looking forward to reading Last Confession. Is the possible a 3rd book for Cream? 🙂

Terrez The Last Confession is the start of a new series. Maybe one day we’ll do a part 3 to C.R.E.A.M. We’ll see. As far as the formats go, Daddy’s Home should be available on the Nook very soon.

This is too funny, my son still holds a grudge against me for not allowing him to own a pet when he was a child! He wanted a hamster, well I told him that I saw one of the hamster’s cousins running in the kitchen the night before & that if he could catch him, then he could have him as a pet!….lol

Julia I actually have an update on the tadpole story that I will post tomorrow. It just gets funnier. I’m waiting for the book to stop “processing” on the B&N site. As soon as it’s up and ready for Nook purchase I’ll let everyone know 🙂

Solomon, as always, you and your family are hilarious. I know the feeling about pets, though when my girls got their hamster, they did take care of it until we moved and they had to give it away. I know at some point you’re gonna give in and get that dog. Take care and I can’t wait to see how the tadpole saga turns out.

Thanks Viki. In light of the ABC Soap Operas being cancelled, we may have to call this continuing saga, “As The Tadpole Turns.” LOL!

Thanks David. I’ll tell LaVeta you said hi. Check out the book. You’ll love it!

If we’re spending almost $4 billion on Philly schools this year, why are so few of them able to pass basic English exams?

Sgt. Harry Dunn did not make January 6th ‘all about race.’ He made it all about America