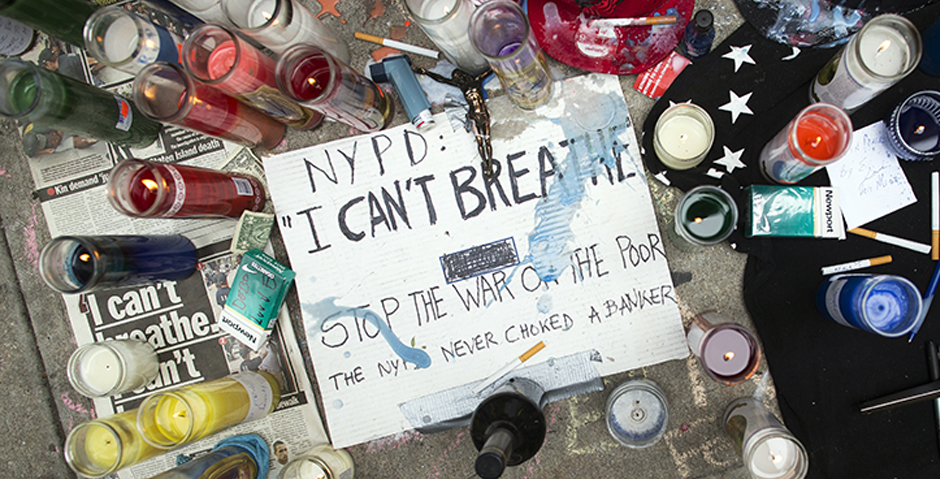 IN 1991, a large black man was beaten by four white police officers. The videotaped attack appeared to be a clear case of police brutality. The black community was outraged, national publicity ensued, and the officers involved were criminally charged.

That was the case of Rodney King, whose videotaped police beating was remarkably similar to the case of Eric Garner, a large black man who was also physically accosted by four white police officers. The main difference is this: King lived to tell the story, but Garner did not.

[blocktext align=”right”]Eric Garner’s case is remarkably similar to that of Rodney King, a large black man who was also physically accosted by four white police officers. The main difference is this: King lived to tell the story, but Garner did not.[/blocktext]

“I can’t breathe!” the asthmatic Garner gasped several times. Minutes later, he was dead. The entire incident was caught on videotape, and on Friday, the New York Medical Examiner ruled Garner’s death a homicide.

Already, there are those who are declaring the Garner homicide an open and shut case against police. But the Rodney King debacle taught us that even videotape does not guarantee that abusive police will be convicted of criminal charges.

In King’s case, police pulled him from his car after a high speed chase and beat him until his face was virtually unrecognizable. The officers—Laurence Powell, Timothy Wind, Theodore Briseno and Stacey Kook—were charged with assault with a deadly weapon and related offenses.

[blocktext align=”left”]King made a public appearance and famously said: “People, I just want to say, can’t we all get along?” Apparently we can’t, because more than 20 years after King was brutally beaten by police, Eric Garner’s case shows that not much has changed.[/blocktext]

The trial in the racially charged case was moved from Los Angeles to Simi Valley, Calif., a predominantly white suburb, after defense attorneys argued that the publicity made it virtually impossible to have a fair trial in L.A.

After the change of venue, a jury comprised of 10 whites, one Latino, and an Asian found the officers not guilty. Los Angeles exploded as thousands rioted.

Apparently we can’t, because more than 20 years after King was brutally beaten by police, Eric Garner’s case shows that not much has changed.

The parallels between Garner and King

But even if the officers are charged and held for trial in connection with Eric Garner’s death, they could very well be acquitted, especially if Garner’s poor health and the fact that he resisted arrest are cited at trial as factors in his death.

Such an acquittal could lead to the same outcomes we saw in Rodney King’s case.

After the officers who beat him were acquitted, King received $3.8 million for his injuries in a civil trial. Garner was a married father of six, and while he is not alive to receive a large jury award, his family could sue.

For now, though, we await the outcome of the investigation into the videotaped chokehold death of Eric Garner. We can only hope the aftermath won’t play out like Rodney King.

Photo: A memorial for Eric Garner rests on the pavement near the site of his death, Saturday, July 19, 2014, in the Staten Island borough of New York. (AP Photo/John Minchillo)

Times are different. Let’s see how this plays out.

Times aren’t that different after all …